The Place of Pictures

In times of navigation-systems and virtuality defining the actual
position reaches a new dimension.“Where is the painting?“, asked
Théophile Gautier looking at Velázquez‘ Meninas.
Where am I, while looking at a picture?
The video installation ‘Instant Spaces‘ with it‘s lampshade
made of canvas orbits this question.

„Does painting always require brush and canvas? Since 2000 Katharina Kohl has been occupying herself with digital imagery of paintings. In her work about Diego Velázquez she examines his painting “Las Meninas“.
The observer follows the camera from the foyer of the Prado up the staircase right into the hall where the painting is hanging. Moving slowly and regularly the picture passes the viewer’s eyes. The room in which the group of personsmare assembled around Meninas is shown the wrong way round. Assuming that Velázquez painted the picture by help of a mirror, i.e. in mirror image, the picture now, in Katharina Kohl‘s video-painting, appears as a spectator would actually have seen the events depicted then.
The gaze wanders from one sequence showing an empty room to the neighbouring one that we know from Velázquez‘ painting. Pictorial Spaces overlap the viewer’s real room. Due to the fact that the video is done without any cuts it remains a painting throughout, in spite of the movements.
Katharina Kohl singles out some of the protagonists, also a lamp connecting pictorial space and real space, or the two monkeys behaving as if they were painters, she even appears herself.
Velázquez‘ painting, with its key issues of time-space-relationship on themone hand and the relationship between the artist, his aristocratic customer and the viewer on the other, has always inspired artists to do their own interpretations.
The digital treatment by Katharina Kohl does not alienate the painting, on the contrary, it presents the painting as an experience in time and space.“ 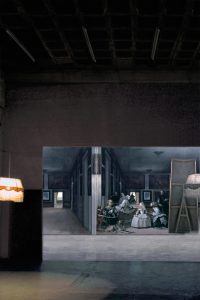 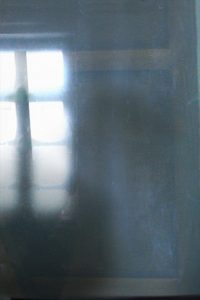